Novo mesto is a small, picturesque town in Dolenjska, or Lower Carinthia – the southeastern part of Slovenia. The idyllic setting hides one of Slovenia's key industrial hubs and a true capital of the national exporting industry.

Slovenia's largest exporter is Renault's factory Revoz – located in Novo mesto. Revoz annually makes some 1.6 billion euros of revenues and is the third largest company in Slovenia.  Just across the fence of the Revoz plant are the locations of two more exporting champions.

TPV is a component supplier for global automotive brands and one of the most innovative companies in Slovenia (see article on year’s best innovations in this issue of the e-newsletter).

Adria Mobil is one of Europe's leading caravan and motorhome manufacturers. In 2017 Adria Mobil became part of French Trigano Group – obviously French investors find themselves at home in the sunny Dolenjska region.

Another strong company with headquarters and facilities in Novo mesto is Krka, Slovenia's top pharmaceutical company and one of the Europe's leading generic drug developers. Krka is the fourth largest company in Slovenia with over 1.2 billion euros of sales.

Novo mesto based companies create on average 63.000 euros of value added per employee, the highest average among all the Slovenian municipalities. Novo mesto has progressed quickly in recent years and is one of the best governed Slovenian towns – only Ljubljana shows better values in key development indicators. And the old town of Novo mesto (which incidentally means »New town«) is one of the first places in Slovenia to introduce so called smart city technologies. Unsurprisingly, Novo mesto earned this year's Zlati kamen (Golden Stone) award for best development achievements.  By the way, “new town” is not new at all. In truth, it is one of the oldest settlements in Slovenia and one of the world's major early iron age archeological sites. 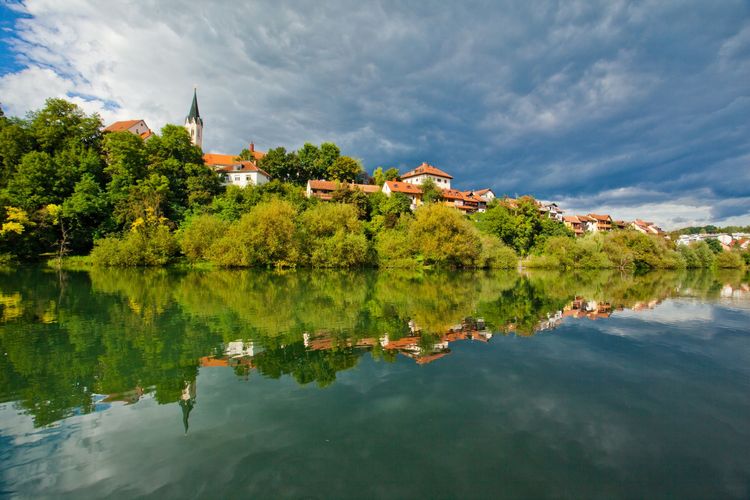 Idyllic Novo mesto is home to some of Slovenia’s top exporters
Photo: STO