Slovenia has been traditionally present on Southeastern European markets: with the integration of the region to the EU this tradition could become an important asset.

n February European Commission issued a statement on »a credible enlargement perspective for and enhanced EU engagement with the Western Balkans«. The way to the full integration of the region is still long – yet the start of the process has not been welcomed only by the states in question but also from Slovenia. The ex-member of the Yugoslav federation has been a EU member since 2004. It is not only a regional success story but also a bridge between the Western Balkans and the EU.

This strong connection between Slovenia and the Southeastern Europe reflects in the trade figures. Slovenia's exports to the region in 2017 exceeded 4.9 billion euros. Only German market where the value of exports reached 5.7 billion is more important. The value of the imports from the region is lower, yet still significant with 3.1 billion euros. Almost 30 years after the Yugoslav federation fell apart Slovenian brands and companies like Petrol, Mercator, Gorenje or Droga are still valued by the consumers in former federal republics. Many of these companies run an extensive network of subsidiaries throughout the region. Petrol has 171 petrol stations from Croatia to Kosovo. Slovenian largest bank operates six subsidiary banks in Bosnia and Herzegovina, Serbia, Montenegro, Kosovo and Macedonia. Zavarovalnica Triglav is one of the largest insurance groups in the region and is present in all then five republics of the former federation. Companies like Gorenje or Slovenian automotive companies often have manufacturing facilities in the region, mostly in Croatia, Serbia or Bosnia. When Slovenian companies get privatized or are acquired by the foreign partners, the new owner thus often inherit a strong sales network throughout the region, local subsidiaries and often also several plants in countries with relatively lower cost of work force.

The main business partners in the region are Croatia, Serbia and Bosnia and Herzegovina. Despite the unresolved political issues (including the border) Croatia remains Slovenia’s most important market in the region accounting for 45 percent of the total exports and 48 percent share of the imports from the region. Interestingly enough, the trade with the Balkan EU members Bulgaria and Romania surpassed the business with ex-Yugoslav republics Macedonia or Montenegro. The membership in the union is undoubtedly a strong booster of the trade.

What’s behind the strong presence of Slovenia in these markets? A tradition (and to some degree also inertia) is clearly one of the reasons, yet not the only one. Because of the decades of joint history Slovenian business people can easily understand and adopt the peculiarities of business in the region. Slovenia is also a new home for numerous ex-pats from Balkan countries and these serve as a bridge between the cultures and markets. And finally, even though almost nobody understands Slovenian south of the Schengen border, Slovenians often speak fluently and understand easily Serbian, Croatian, or Bosnian languages. 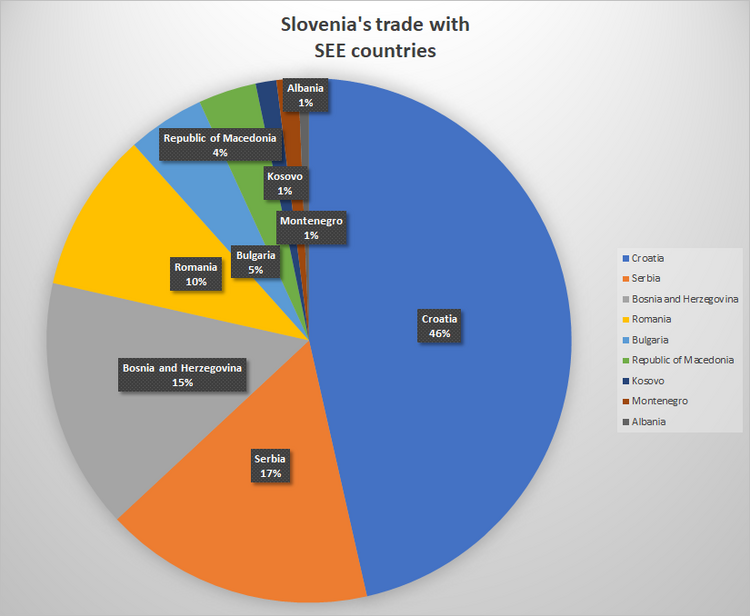