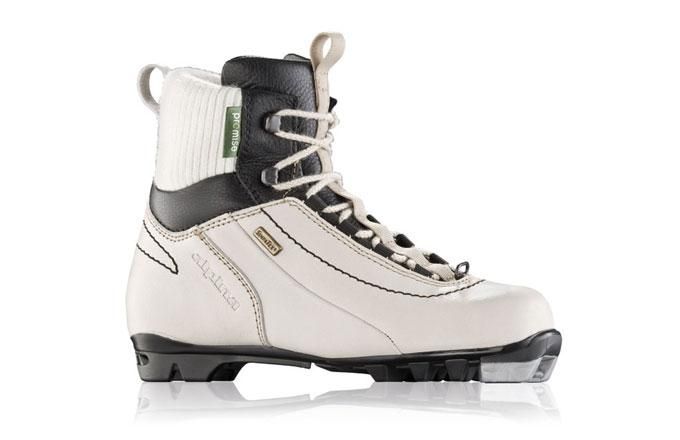 This past season Alpina introduced Promise, a brand new and highly innovative shoe closely linked with both the history of cross-country skiing and its future. Owing to its design, materials and production technology, the shoe is almost completely degradable. It has excellent technical and thermal properties, yet is waterproof and breathable. Most importantly it’s comfortable and adapts to a multitude of foot shapes. And the simple, straightforward design highlights its highly functional character.

Promise’s innovative design, blending high-tech functionality with a retro nod to the romance of yesteryear’s emotive styling is the product of winning co-operation between Alpina and Studio Jure Miklavc. So innovative in fact it earned Alpina and the Alpina-Miklavc team their third red dot award for product design 2010.
But Alpina’s wins aren’t limited to only to the big design circles: Alpina scores high in competitive winter sport as well. The 2010 Vancouver Olympics saw athletes using Alpina boots take seven gold, seven silver and six bronze medals, as well as many wins in array of demanding world championship events.
Founded back in 1947 Alpina has grown into one of the region's largest footwear manufacturers, and is recognised as one of the leading producers of specialised athletic footwear in the world, particularly in the ski boots (both downhill and cross country) and hiking shoes. The company's innovative designs have been rewarded in each of the past three years with Red Dot awards, most recently for the Promise ski boot in 2010, which was designed in cooperation with the studio of noted Slovene designer Jure Miklavc - who was also responsible for the previous two winning designs.
more: www.alpina.si
Tags: Sport & Leisure