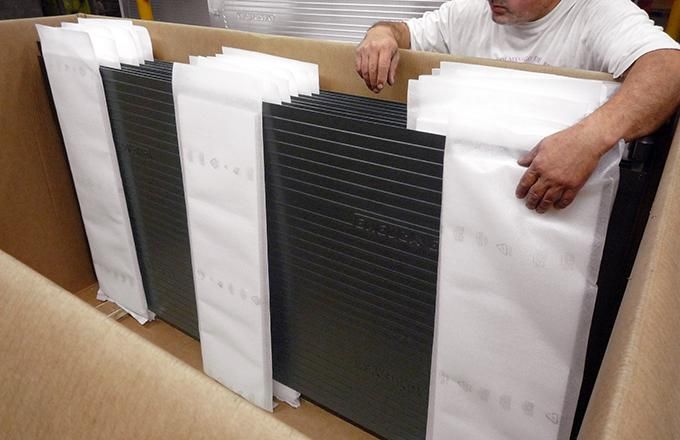 Roughly half of all fossil fuels burnt in Europe are used for heating. New EU energy schemes require increasingly greater proportions of renewable energy in gross domestic consumption. Solar thermal power has a central role to play, with a 10-fold increase for solar-thermal installations forecasted for the coming decade. And new technically efficient and financially viable solutions are needed to make this work.

The current range of spectrally selective coatings, marketed under the Color (the newest addition to the Helios Group) brand Suncolor, is based on two technologies. Thickness Sensitive Spectrally Selective (TSSS) paint coatings are based on interaction between a thin layer of highly light-absorptive paint and a thermal infrared reflective substrate, and can be applied by spraying, dip- or coil-coating.

On the other hand, Thickness Insensitive Spectrally Selective (TISS) paint coatings can be applied like a plain non-selective paint as they combine both absorptive and reflective pigments providing selectivity, regardless of the substrate or paint film thickness, offering more flexibility to solar thermal equipment manufacturers both in terms of manufacturing technologies and materials employed. Further, Helios provides TISS paints in several colours, which enables unique architectural solutions for roof as well as façade solar collectors, glazed or unglazed.

The program behind these highly advanced technologies was initiated at Color back in the 1980s by Dr. Boris Orel, and has since been led by Dr. Orel and his team from the National Institute of Chemistry of Slovenia (NIC), Ljubljana.

In fact their recent joint-development work in spectrally selective coatings brought them the 2010 Puch prize, the state’s highest award for outstanding discoveries for the promotion of enterprise. Accepting the award were recipients were Marjanca Vodlan and Miha Steinbücher from Helios, and Dr. Boris Orel, Dr. Ivan Jerman and Dr. Matjaž Koželj from NIC.

The technology for controlling radiation heat flow with paints, originally developed for solar collector coatings is also employed in other fields and applications, like low radiative heat flow paints developed as a means of thermal isolation. And development doesn’t stop there. A hard and highly heat-resistant spectrally selective coating currently under development may find its way into planned solar thermal power plants in the Sahara.