Mr. Crocodile on a stick, from Wilsonic Design, is a prime piece of racing equipment for any youngster. 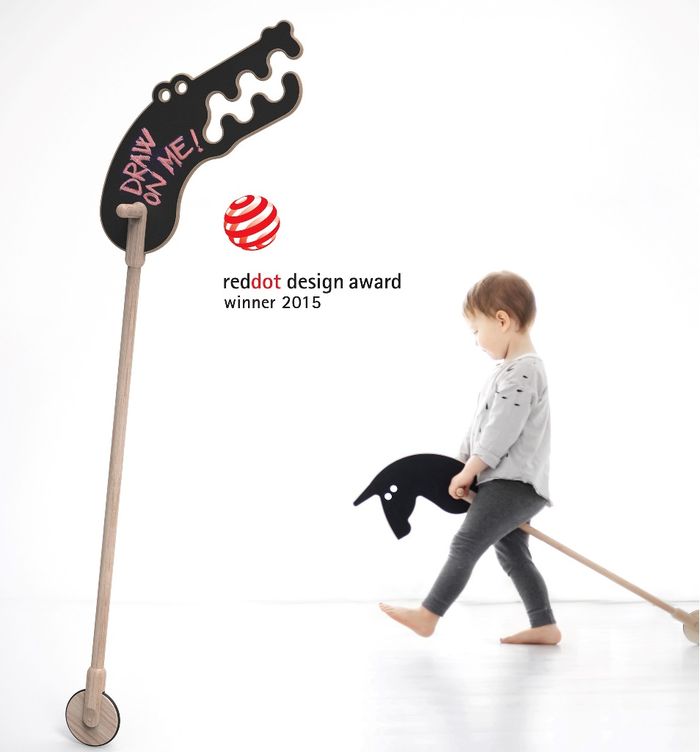 In the beginning there was the horse, on a stick. Kids took it in their hands and rode it, galloped off to far off lands on exciting adventures. It was low-tech, high imagination creative play at its best. And many a rich play hour was passed, happy and carefree.
Then came the crocodile – Mr. Crocodile to be precise. He’s much like the horse, a fine strong animal on which to embark on adventures, alone or in the company of good, like-minded young friends. Only Mr. Crocodile is a something of an upgrade, a contemporary interpretation of the classic vintage horse. He has an innovative, marvellously shaped head, which doubles as a chalkboard, on which important notes, directions and impressions can be written – or any quick, colourful scribble.
He even has a wheel, to make him go even faster. It’s for youngsters who like to race with their friends. And it’s made almost entirely of wood – which keeps things natural, uncomplicated and just a little old-school. In fact all of the products on Wilsonic Design’s web shop ooh-noo.com created for children of design-conscious parents looking for smart, contemporary design products like toys, bedding and more, are made of natural materials. The shop has been operating, successfully, since 2014.
Mr. Crocodile was designed by Wilsonic’s Peter Rojc, Methodius Burgar and Nina Mihovec. And designed well enough to win the Red Dot Award 2015 – the fourth such prestigious award the rather special Wilsonic Design company has earned in the past five years. (Back in 2009 they received the Red Dot for medical table S for Novak M d. o. o., in 2012 a Red Dot for rocking hobby Googy, and in 2014 for the HEC series of fans for Hidria.) Who ever said you can’t teach an old horse new tricks?
Mr. Crocodile is 103 cm high, 14 cm wide and 28 cm deep – which is a pretty good size for a wooden racing crocodile.